Sunshine Walkers: The Best Of Kimberley Rew And Lee Cave-Berry, eschews the chart-toppers – and compositions covered by mega-stars such as The Bangles and Celine Dion – and opens the lid on a treasure chest of equally well-crafted, loving, clever, honey-harmonied and rhythmically irresistible songs from their intertwined back catalogues. These stretch from Kim's 1982 outing, The Bible Of Bop (with help from Katrina of The Waves fame, The dBs and various Soft Boys) to Kim and Lee's latest joint effort, Enjoy The Rest Of Your Day. After his work as the song-writing powerhouse of Katrina And The Waves, and as the lead guitarist for The Soft Boys, Kim released a string of eleven solo albums and co-produced Lee's wonderful, Spring Forward collection. This introduction to Kim and Lee's musical bounty is yours to explore.

Classic Tracks: Kimberley is an unsung hero of British songwriting and guitar-playing. He wrote Walking On Sunshine, one of the greatest pop songs of all time. Love Shine A Light remains the UK’s last Eurovision Song Contest winner, from back in 1997. Going Down To Liverpool became The Bangles’ second single, while the Robyn Hitchcock-penned, Kingdom Of Love comes from Kim’s spell as guitarist for cult legends, The Soft Boys. Kim and Lee Cave-Berry – his wife and musical compadre – have re-recorded these gems, and added a little something, for your exclusive listening pleasure.

“Life goes on. Sooner or later we find 'we’re knocking on a bit’. Lee and I do what we always do, which is write songs, sing songs, record songs. I wrote these when the world was young – they now have a certain glow of sanctity, from the age of the Founding Fathers, pop music having in the meantime become a religion.” 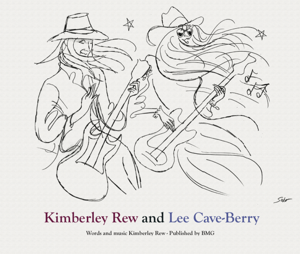 Our classic tracks will be available to digitally download for everyone who purchases the album.

Sunshine Walkers: The Best Of Kimberley Rew And Lee Cave-Berry, eschews the chart-toppers and opens the lid on a treasure chest of equally well-crafted, loving, clever, honey-harmonyed and rhythmically irresistible songs from their intertwined back catalogues.